In this episode of Conscious Corner, Camela Guevara is the featured guest. Camela is the Media Manager and Lead Designer for the College of Charleston Office of Sustainability and is a 2010 graduate of the College of Charleston. From 2017-2018 she also served as the Artist in Residence for the City of North Charleston. The discussion was how Guevara’s art is reflective of social change and linked to sustainability. Camela explains how the impetus of her artwork is largely focused on fiber arts and the undervalued labor that comes of weaving and sewing. Guevara’s art ranges from visual arts through painting with watercolors to up-cycling items intended for obsolescence in her fiber art for purposes of personal sustainability and perseverance through peace and transformative thinking around objects with artistic potential.

In this episode of Conscious Corner, Vanity chooses to relate the content of the episode specifically to her existence as a transgender woman of color. She notes that within the LGBTQ community, transgender women of color disproportionately face more violence than others in the community and the alarming homicide rates of these women prove that statement. From the rising rates of hate crimes and hate group activities tracked by the Southern Poverty Law Center to the Trump Transgender Military Ban to the murders of transgender women of color, Vanity highlights the nature of repeating violence. In honor of June being pride month, and acknowledging that Pride was the result of resistance of brutality by Transgender women of color, she recognizes the transgender women who had their lives stripped away in the United States in 2018 and 2019. Check out this Human Rights Campaign link to get descriptions on the individuals lost at the hands of violence. Also, be sure to Check out the Southern Poverty Law Center for more hate crime statistics:

Conscious Corner Episode 4 – Vanity Reflects on her time at the Women’s March D.C. and the Annual AIDS United Conference

In this episode, host Vanity talks about two social justice demonstrations that she took part in. The first was the Women’s March in the nation’s capital in January of 2019. Vanity attended the first Women’s March in 2017 in Philadelphia, PA and was enamored with the amount of civic engagement she saw illustrated by the over 200,000 people in attendance as a result to the newly elected President Trump. In 2018, Vanity spoke at the Women’s March South Carolina and felt compelled to take up space at the march in 2019. Vanity speaks about encounters with a group of “Pro-Life Feminists” and relates that experience to the recent policy changes regarding women’s rights and access to abortions across many states of the U.S. The second demonstration was the AIDS United annual AIDSWatch conference, sponsored by the Elizabeth Taylor Foundation. Vanity first became interested in HIV/ AIDS policy after attending the 2017 Creating Change conference in Philadelphia, PA, sponsored by the National LGBTQ Taskforce. After attending a seminar on Disease Criminalization as it pertains to a communicable disease like HIV/ AIDS, she decided to research deeper into the effects of stigmatization of HIV on public policy. In the Spring of 2018 at the Office of Sustainability, she hosted a Social Justice Coffee Hour on Public Policy and Criminalization of HIV. After receiving a Student Leadership Award Research Travel Grant she headed to the AIDSWatch conference to soak up as much information as she could. Check out the article of her as one of the recipients of the Race and Social Justice Initiative Grant and learn about the intent of her research. Also, check out the episode for more details on her experiences at the conference.

In this episode, we speak with student-activist Tanner Crunelle about the underlying connections of Sustainability to social issues on campus and discerning the umbrella of Sustainability from the core pillar of Environmentalism. Tanner is one of the many student activists on campus and is recognized as an esteemed Ketner Emerging Leaders Scholar. Tanner is also a student at the College of Charleston’s Honors College. This past year Tanner spearheaded an oratorical competition on campus named after alumnus Frank Sturcken, ‘51. This oratorical competition was in honor of the 50 years since formal desegregation at the College of Charleston. See the links below to find out what kind of work Tanner focuses on:

Conscious Corner Episode 2 – Leaving Your Mark: Unifying Students through the Lens of Entrepreneurship

Leadership in an effort to celebrate the “otherness” of students here on campus is something that’s critical to the diversity of the student body. As an organization that prides itself on strengthening the self-love a student has for themself, Collegiate Curls is committed to being the voice of multicultural students through positive means of uplift. Today we talk to national founder, Courtney Hicks. Courtney briefly touches on the pushback received from those who fail to see the value in celebrating the culture and hair of people of color. She also discusses what drives her to continue to mobilize students in such a special way. Courtney is a natural hair care guru, a brand ambassador and is a recent graduate from the College of Charleston. She now is working in Public Relations and Media in the rebranding efforts of the Avery Research Center.  You can follow Courtney on Instagram @courtney_hi Below is an attached link for the Collegiate Curls website. Feel free to check out their services or donate to the cause: 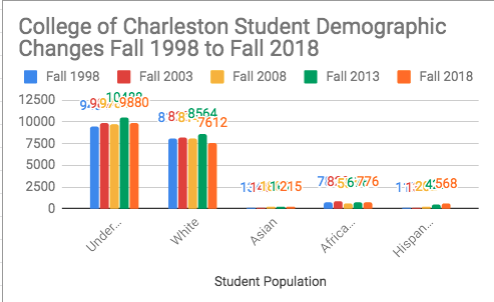